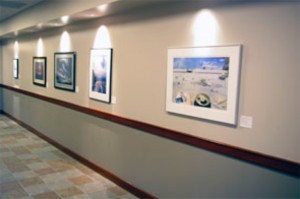 The Environmental Photography Exhibition was initially formed by the Colorado Alliance for Environmental Education to compliment the Colorado Environmental Film Festival. The first exhibition began November 21, 2009 with a worldwide call for entries that would stimulate thought over the environment. Submissions came in from countries all around the world. 33 prints selected by Hal Gould, the curator of the world’s oldest fine art gallery Camera Obscura. The second year prints were selected by Al Weber, world renowned fine-art photographer, and co-instructor with Ansel Adams at the Yosemite Photography workshops. Corin Ford Forester was awarded best of show the first year and Elizabeth Weinstein received best of show the second year. The third year had three jurors: Kim Hubbord, senior photo editor at National Geographic; Windy Erickson, editor-in-chief at Photo Techniques Magazine; and Steven Weaver of Earth Systems Imaging. For diversity sake, the fourth year images were curated from The International League on Conservation Photographers by American Alpine Museum’s director/curator, Shelby Arnold, and the exhibition’s director Kent Gunnufson. The fifth year shook things up even more by calling for 10 image portfolios to be accepted and displayed as a whole. The 6th year will be back to a general call for entry.

The Environmental Photography Exhibit was held in conjunction with the Colorado Environmental Film Festival at the American Mountaineering Center, Golden, Colorado. Over 5000 viewed the show. A video from the show images is at the bottom of the page. 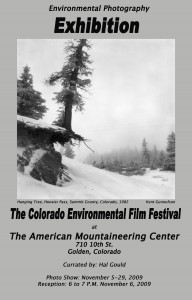 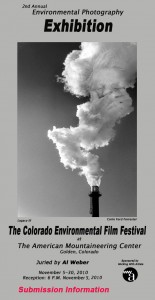 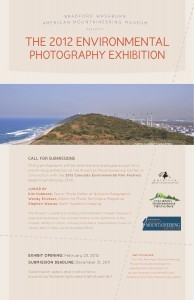 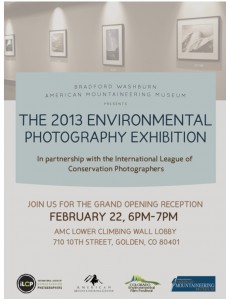 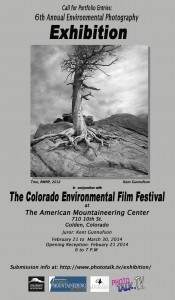 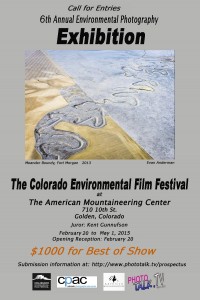 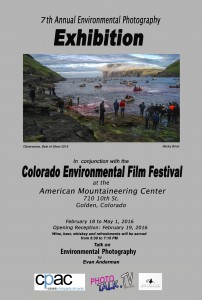